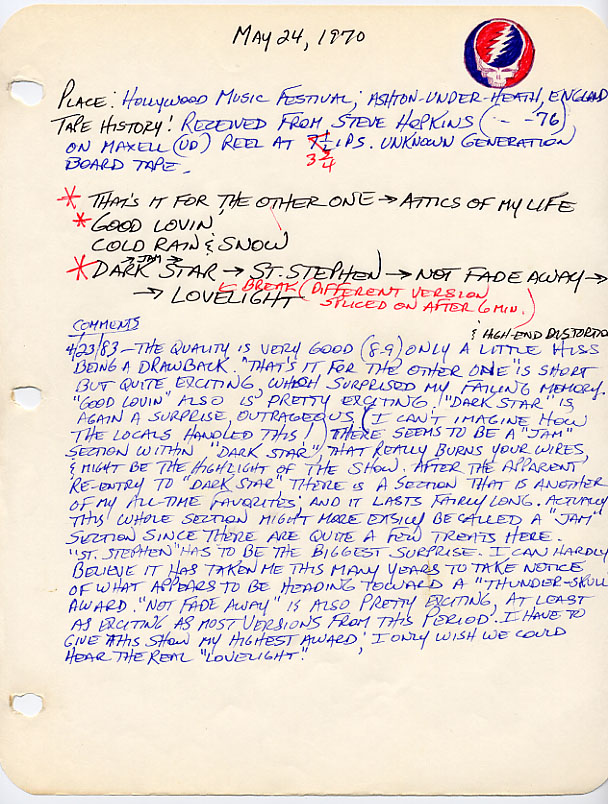 My version of this show, which was basically the SBD (with many balance adjustments done by me) patched with parts from both the circulating AUD and a 3rd copy, a mono 'board' of the show I had. This was torrented recently on Lossless Legs. After someone quite correctly pointed out to me that I'd used the AUD version of the Outro rather than the SBD version, I decided make a new version (this one) which would blend the 2 endings.

By chance, I also happened to listen again to the transition from Cold Rain & Snow to Dark Star on the AUD recording (which I hadn't listened to for many years). I realised that it contained more than 2 additional minutes of tuning which wasn't on the SBD and hence hadn't made it onto my own version (as torrented on LL). So I decided to patch it back in to make the show as accurate as possible. I then went back comparing the AUD to my own version and discovered several other places where 'tuning' and 'dead air' had been cut from the SBD copy. As per the above, I've restored everything I can using the AUD for patches into my own copy.

The following are the changes I've made to my copy since it was torrented on LL. I did these changes purely for my own listening pleasure but I'd be delighted if they got shared with anyone else who might want them. So please accept them for what they are - I just don't want to be accused of muddying the gene-pool. They are all designed to be dropped into the torrented version as replacement tracks.

*04. I Know You Rider - about 50 seconds additional tuning patched in from the AUD at end of song

*06. Me & My Uncle - about a minute of additional tuning patched in from the AUD at the end of the song

*11. Attics Of My Life - about 50 seconds additional tuning patched in from the AUD at end of song

*13. Cold Rain & Snow - more than 2 additional minutes of tuning from the AUD patched in at end of song

*17. Lovelight - band's comments and Cutler's chants from the SBD mixed into what was already there.

Reviewer: c-freedom - favoritefavoritefavoritefavorite - May 25, 2016
Subject: Spanish Lady...
Well the 1st review got me interested and perhaps the only downside to the TDIH is it is tempting to just go with the most streamed and most reviewed shows.
I like listening to shows from outside the U.S. ( not even sure I count Canada in that mix). But I certainly do count England as foreign soil. Europe 72 has the most well known of the English shows yet how cool is it to hear the Dead play here in 1970.
I felt like the Casey Jones and even China >Rider are just passible. It is at Hard to Handle that Garcia really picks up the pace. Weir delivers a nice Me and My Uncle and the Other One between the Cryptical just rockets. Are they playing Attics??? Oh sheet, they are, wow that was an amazing transition right there! I love Phil's vocals here. This is so freakin mellow. What a vulnerable song to play so early in the show!
Good Lovin a really good tune for the Dead in 1970. One of my favorites from this era being M.I.T steps.
Hearing plenty of Garcia so liking this a lot. Great ensemble singing at the end with Pig leading the way.
Rain & Snow- nice dip back in the catalog. Pretty varied set list.-Going where those chilly winds don't blow!
Pace of this show somewhat deliberate but oh here comes the Dark Star.
A couple of things I picked up on in the notes this is the Grateful Dead's first European Performance.
Also this was a festival which accounts for those obligatory stage announcements.
Here is something-- I know there is almost 9 months separating this from Woodstock but the Dead play way better here.
Nice STAR with feedback laced trippy-ness
Other thing I noticed they are on the bill here with Black Sabbath---- I bet that did not happen very often
Star gets so psychedelic everybody in my house saying
What's that? yes, it is head phone time.
Reviewer: I Call - favoritefavoritefavoritefavoritefavorite - May 24, 2016
Subject: Great Show - Great Dark Star
First and foremost, I want to thank Simon Phillips for the time and effort put in to provide such an outstanding version of this show. While I'm not a purist and could live without the "extra" tuning between songs, the sound here is fabulous - as is the show itself. I have been listening to "this date in history" every day for a while now. Always a pleasure to hear a new show I was unaware of. If you haven't heard this one, you should give it a try. The Dark Star really gets into a very nice groove. So do other parts of the show.